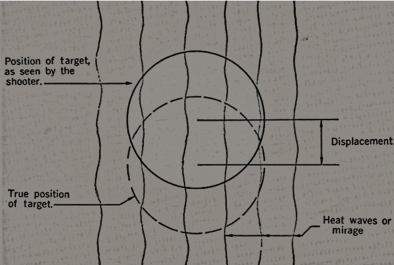 How Our Cover Works

The custom made cover prevents mirage from your suppressor interfering with your optical image of the target and the adverse effects on accuracy as a result. As it is custom made it will always be the perfect fit for your
suppressor.

Eliminating mirage is accomplished by the use of cutting edge insulating materials. Designed and manufactured in south Africa, the cover is a first of its kind in southern Africa and one of a very few in the world being offered in custom sizes. The Cover is extremely lightweight, and only measures from 3mm in Total thickness. The Cover is certified to temperatures of up to 200 Degrees Celsius.

During competition shooting or whenever the shooter fires 3 or more shots, especially during warm, humid summer days, the barrel and suppressor of the rifle heats up significantly. Because the Suppressor has a greater surface area than the barrel the mirage effect becomes immediately apparent as viewed through the rifle scope especially on higher magnification. The effect can be reduced somewhat by reducing magnification, but unless the Suppressor is allowed to cool down completely the hazy effect will not go away.

The Cover is designed to minimise heat transfer between the Suppressor Surface and outside Surface of the Cover. The Cover will feel warm to the touch, but will be considerably cooler than the exterior of the suppressor itself. And not warm enough to cause mirage through your rifle scope. Because of the simple mounting system the cover can be easily removed after firing to assist with heat dissipation and also making the handling of a hot Suppressor easier. No more burnt fingers.

The Cover has a built in retention system to ensure it will not move even on the heaviest of recoiling rifles. As the cover has a 100% Cotton Canvas exterior, it will resist catching on brush even when used on hunting rifles in a bushveld setup.

Can The Cover Damage Your Rifle?

This is a frequent question and often leads to heated discussions.

The short answer however is No!

If you shoot your rifle in such a way that the suppressor becomes red hot, chances are that you have already ruined your rifle. The temperature and pressure in the throat area of the rifle is substantially higher than at the muzzle.

Yes by adding the cover you are containing the heat in the suppressor, this is the entire purpose of any cover meant to assist in mirage dissipation.

But even if left on the suppressor after firing the cover will not damage you barrel or your firearm.

Improper suppressor design (too much blowback onto crown) or poor barrel cleaning and suppressor cleaning routines will have a much worse effect on your equipment than any cover will ever have.

How do I correctly measure my suppressor?

In order to ensure your measurements are correct, please double check with the following formula: